The Dutch guitarist Han Jonkers studied guitar with Hans-Lutz Niessen at the Maastricht College of Music. After earning a music education degree and a soloist’s diploma, a scholarship made it possible for him to study for several years with Oscar Ghiglia at the Accademia Musicale Chigiana in Siena, Italy, where he was awarded the “Diploma di Merito.” Further studies followed at the Basel Academy of Music with Konrad Ragossnig and Oscar Ghiglia, where he also graduated with a soloist’s diploma.
Han Jonkers was prize-winner at several international competitions, 1983 in Viña del Mar, Chile, and in 1985 at the Competition “Maria Canals” in Barcelona, Spain. Since 1981 resident in Switzerland, he performs as a soloist and in chamber music formations on all continents. A number of composers have written works for guitar at his behest. His activities include the founding of guitar festivals and courses as well as the authoring of musicological contributions for specialist journals.
Han Jonkers gives workshops at colleges of music at home and abroad, and summer courses under the auspices of the Arosa (Switzerland) Music Festival. Within the framework of the Swiss canton of Aargau’s partnership with Byelorussia, he plays concerts there regularly and gives master classes at the Minsk College of Music.

In March 2007, Han Jonkers went on his first New Zealand Tour, with solo recitals and workshops at Waikato University in Hamilton. In August 2009 Han Jonkers was on his third extensive tour through Namibia & South Africa.

Han Jonkers lives in Basel, and is instructor of classical guitar at the University of Applied Sciences of Northwest Switzerland.
Musikverlag Nepomuk, Aarau, publishes a series of music for guitar, of which he is the general editor. His CDs have been issued on CADENZA RECORDS, BAYER-RECORDS and PAN CLASSICS, and have received praise from the critics.

Since 2003, Han Jonkers is president of the Swiss section of the EGTA – European Guitar Teachers Association. 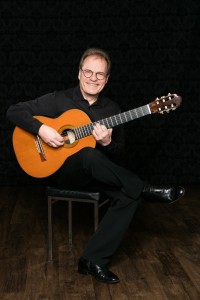